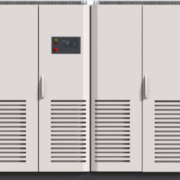 The conversion efficiency of a solar inverter heavily depends upon its load and DC voltage input. Calculating efficiency demands very accurate data. Missing points or corrupted values should be removed from the calculation so the result is not biased.

There is a standard conversion in Europe (and others in other continents) called Euro Efficiency, that uses multiple conversion efficiency measurements taken at different output power, according to a standard formula, to calculate efficiency. It is calculated throughout the entire operation range, and avoids mixing performances between different power load conditions.

Euro Efficiency is important because it addresses significant differences in functioning in different currents. Additionally, it is the main way that inverter vendors communicate their inverters’ state of health with clients, in accordance to defined input DC voltage taken from a datasheet.

The benefit of Raycatch’s DeepSolar technology is that it is the only diagnostics system that automatically presents the performance according to the Euro Efficiency metrics system (as well as the CEC standard), for every inverter, on a daily basis.

DeepSolar displays the inverter efficiency over time. It also displays inverter efficiency drops and rises, to help find immediate corrective actions. Using DeepSolar, clients are provided with a list of inverters with Euro Efficiency that are significantly lower than the datasheet value, which can therefore allow them to make much better warranty claims.