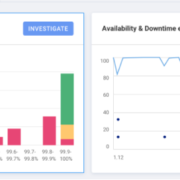 Raycatch is excited to launch Deepsolar’s Eventbook, a brand-new feature to its system. The idea behind Eventbook is to track all the events happening in the solar portfolio, in order to provide a faster and more accurate response. This response will lead to higher yield of recoverable energy and thus higher revenues.

Eventbook’s in-depth tracking gives more insights to the work process and important changes in the assets. This allows users to focus more clearly on corrective actions needed for better plant outcomes. It also helps users track the O&M events on a daily or weekly level, to better control the contractor technicians’ activities.

Some features that Eventbook displays are the incidents of downtime, indicants of disconnection, and any sudden drops in string performance and efficiency of the inverters that are created by local issues, which can be then solved by a maintenance task. It also shows communication issues, like non-transmitting components for stings, inverters and irradiation sensors.

Eventbook is able to detect disconnections even when there is CB or inverter sensors with up to 30 strings under it. With that, it provides energy-weighted losses qualifications.

Eventbook also provides a visual display for all kinds of events. For example:

Why Euro Efficiency Is Important?
Scroll to top